A telescope is an optical instrument that aids in the observation of remote objects by collecting electromagnetic radiation (such as visible light). The first known practical telescopes were invented in the Netherlands at the beginning of the 17th century, by using glass lenses. They found use in both terrestrial applications and astronomy. Within a few decades, the reflecting telescope was invented, which used mirrors to collect and focus the light. In the 20th century many new types of telescopes were invented, including radio telescopes in the 1930s and infrared telescopes in the 1960s. The word telescope now refers to a wide range of instruments capable of detecting different regions of the electromagnetic spectrum, and in some cases other types of detectors. 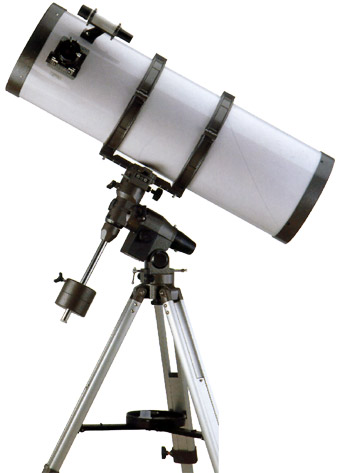 Catadioptric telescopes are optical telescopes that combine specifically shaped mirrors and lenses to form an image. This is usually done so that the telescope can have an overall greater degree of error correction than their all-lens or all-mirror counterparts, with a consequently wider aberration-free field of view. Their designs can have simple all-spherical surfaces and can take advantage of a folded optical path that reduces the mass of the telescope, making them easier to manufacture. Many types employ “correctors”, a lens or curved mirror in a combined image-forming optical system so that the reflective or refractive element can correct the aberrations produced by its counterpart.

The achromatic telescope is a refracting telescope that uses an achromatic lens to correct for chromatic aberration. When an image passes through a lens, the light is refracted at different angles for different wavelengths. This produces focal lengths that are dependent on the color of the light. 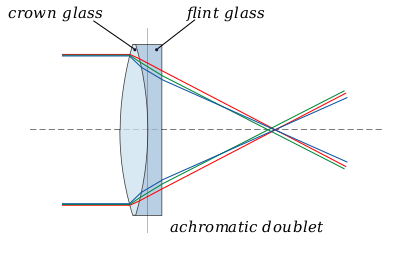 An apochromat, or apochromatic lens (apo), is a photographic or other lens that has better correction of chromatic and spherical aberration than the much more common achromat lenses. Apochromatic lenses are designed to bring three wavelengths (typically red, green, and blue) into focus in the same plane.[1] The residual color error (secondary spectrum) can be up to an order of magnitude less than for an achromatic lens of equivalent aperture and focal length. Apochromats are also corrected for spherical aberration at two wavelengths, rather than one as in an achromat.

The Gregorian telescope, described by Scottish astronomer and mathematician James Gregory in his 1663 book Optica Promota, employs a concave secondary mirror that reflects the image back through a hole in the primary mirror. This produces an upright image, useful for terrestrial observations. Some small spotting scopes are still built this way. There are several large modern telescopes that use a Gregorian configuration such as the Vatican Advanced Technology Telescope, the Magellan telescopes, the Large Binocular Telescope, and the Giant Magellan Telescope.

The Newtonian telescope was the first successful reflecting telescope, completed by Isaac Newton in 1668. It usually has a paraboloid primary mirror but at focal ratios of f/8 or longer a spherical primary mirror can be sufficient for high visual resolution. A flat secondary mirror reflects the light to a focal plane at the side of the top of the telescope tube. It is one of the simplest and least expensive designs for a given size of primary, and is popular with amateur telescope makers as a home-build project.

The Cassegrain telescope (sometimes called the "Classic Cassegrain") was first published in an 1672 design attributed to Laurent Cassegrain. It has a parabolic primary mirror, and a hyperbolic secondary mirror that reflects the light back down through a hole in the primary. Folding and diverging effect of the secondary creates a telescope with a long focal length while having a short tube length

A Ritchey–Chrétien telescope (RCT or simply RC) is a specialized variant of the Cassegrain telescope that has a hyperbolic primary mirror and a hyperbolic secondary mirror designed to eliminate off-axis optical errors (coma). The RCT has a wider field of view free of optical errors compared to a more traditional reflecting telescope configuration. Since the mid 20th century, a majority of large professional research telescopes have been Ritchey–Chrétien configurations; some well-known examples are the Hubble Space Telescope, the Keck telescopes and the ESO Very Large Telescope.

The Schmidt–Cassegrain is a catadioptric telescope that combines a Cassegrain reflector's optical path with a Schmidt corrector plate to make a compact astronomical instrument that uses simple spherical surfaces. The Schmidt–Cassegrain design is very popular with consumer telescope manufacturers because it combines easy-to-manufacture spherical optical surfaces to create an instrument with the long focal length of a refracting telescope with the lower cost per aperture of a reflecting telescope. The compact design makes it very portable for its given aperture, which adds to its marketability. Their high f-ratio means they are not a wide-field telescope like their Schmidt camera predecessor, but they are good for more narrow-field deep sky and planetary viewing. 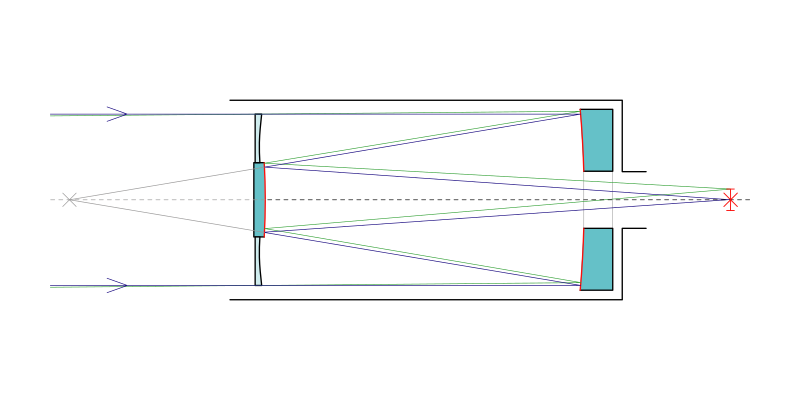 The Maksutov (also called a "Mak") is a catadioptric telescope design that combines a spherical mirror with a weakly negative meniscus lens in a design that takes advantage of all the surfaces being nearly "spherically symmetrical". The negative lens is usually full diameter and placed at the entrance pupil of the telescope (commonly called a "corrector plate" or "meniscus corrector shell"). The design corrects the problems of off-axis aberrations such as coma found in reflecting telescopes while also correcting chromatic aberration. It was patented in 1941 by Russian optician Dmitri Dmitrievich Maksutov. Maksutov based his design on the idea behind the Schmidt camera of using the spherical errors of a negative lens to correct the opposite errors in a spherical primary mirror. The design is most commonly seen in a Cassegrain variation, with an integrated secondary, that can use all-spherical elements, thereby simplifying fabrication. Maksutov telescopes have been sold on the amateur market since the 1950s. There are many Maksutov designs that use a Cassegrain configuration, mounting a convex secondary mirror near the focus of the primary mirror. Most types use full-aperture correctors and are therefore not very large, since the corrector plate rapidly becomes prohibitively large, heavy and expensive as the aperture increases, with very long cool-down times to reach optimal optical performance.